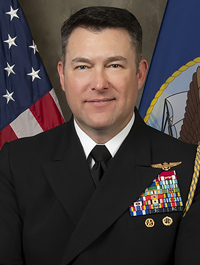 CAPT Starkey is a native of Mitchellville, Maryland, and graduated from Virginia Tech with a Bachelor of Science Degree in Math. He was commissioned in December 1991, and was designated a Naval Aviator in April 1994.

In August 1998, he reported to Helicopter Antisubmarine Squadron (HS) 10 for H-60 transition training and duty as the MH-60S Team Lead for the H-60R/S Fleet Introduction Team (FIT). During this tour he flew as an H-60F/H FRS Instructor while managing the MH-60S manpower and aircraft transition schedule and training curriculum. Additionally, he provided support to Commander, 2nd Fleet's Helicopter Reorganization Study, which laid the groundwork for the Navy's future helicopter operations.

In April of 2001, CAPT Starkey reported to USS Enterprise (CVN 65) as the Assistant Navigator. During this tour, he deployed to the Mediterranean Sea, Northern Arabian Gulf, and Arabian Sea in support of Operations Southern Watch and Enduring Freedom.

In August of 2003, CAPT Starkey reported to HS-3 where he served as the Squadron's Safety and Operations Officer. In September 2005, he deployed with USS Theodore Roosevelt (CVN 71) to support Operation Iraqi Freedom. During this deployment, he coordinated the integration of U.S. Navy helicopters with the British Joint Helicopter Force-Iraq in Basrah.

In 2006, CAPT Starkey attended the U. S. Army's Command and General Staff College, while also earning a Master of Arts Degree in Management from Webster University.

CAPT Starkey became the Helicopter Antisubmarine Squadron (HS) 3 Executive Officer in September 2007 and assumed command of the squadron on December 18, 2008. Upon their return from deployment, the squadron redesignated itself as Helicopter Sea Combat Squadron (HSC) 9, moved to Norfolk, Virginia, and transitioned to the MH-60S helicopter. The squadron became operational again in October 2009 and sent two aircraft to Haiti to participate in Operation Unified Response in January 2010.

From 2010 to 2013, CAPT Starkey was a member of the Joint Staff where his portfolio included the Unified Command Plan and Global Defense Posture. In July 2013, he transferred to the Office of the Chief of Naval Operations for Operations, Plans and Strategy (N3/N5) staff to work on the Strategic Laydown and Dispersal Plan for the Fleet.

Chief of Naval Air Training | This is an official U.S. Navy website.

You are about to exit the Chief of Naval Air Training web server.