Advanced Training at VT-4 and VT-86 provides tactical training to student NFOs that tests and prepares them for their future fleet aircraft. Upon completion of Advanced training, NFOs receive their wings of gold and move on to their respective Fleet Replacement Squadron (FRS).

MPR students utilize these systems to perform Anti-Surface and Anti-Submarine Warfare, Electronic Warfare, Intelligence Surveillance and Reconnaissance, and Search and Rescue missions. Upon graduation, NFOs continue to VP-30 in Jacksonville, FL for training in the P-3C, EP-3E, or P-8A.

TACAMO students learn complex communications protocols, prioritization and CRM skills that prepare them for training in the E-6B at VQ-7 in Oklahoma City, OK.

AEW students learn Command and Control and Air Intercept Control, and after graduation move on to VAW-120 in Norfolk, VA for training in the E-2C or E-2D.

Strike Fighter NFO training is conducted at VT-86 utilizing specially modified T-45C simulators and aircraft incorporating the Virtual Mission Training System (VMTS). VMTS allows NFOs to train for air-to-air or air-to-ground missions using a synthetic RADAR that mirrors the capability of the F/A-18. Utilizing a data link network and an instructor ground station, students perform complex missions against multiple air and surface targets. NFOs train for Strike, Close Air Support, and All Weather Intercept missions. After graduation, Navy NFOs will train in the F/A-18F with either VFA-106 in Virginia Beach, VA or VFA-122 in Lemoore, CA, or the EA-18G with VAQ-129 in Whidbey Island, WA. Marine Corps NFOs will train in the F/A-18D with VMFAT-101 in Miramar, CA. 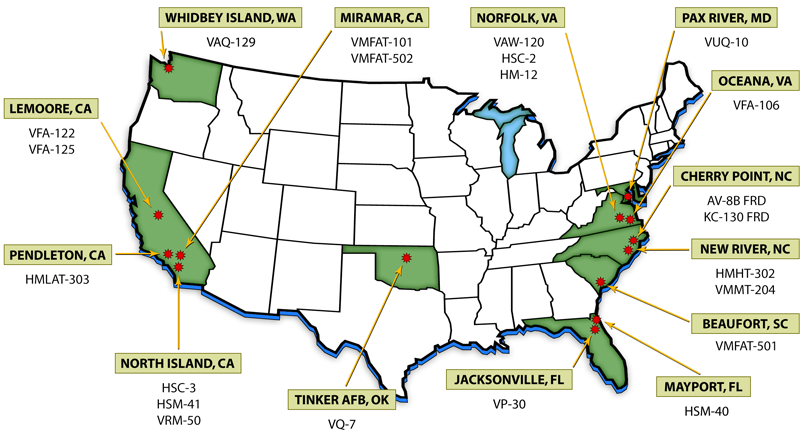 Chief of Naval Air Training | This is an official U.S. Navy website.

You are about to exit the Chief of Naval Air Training web server.